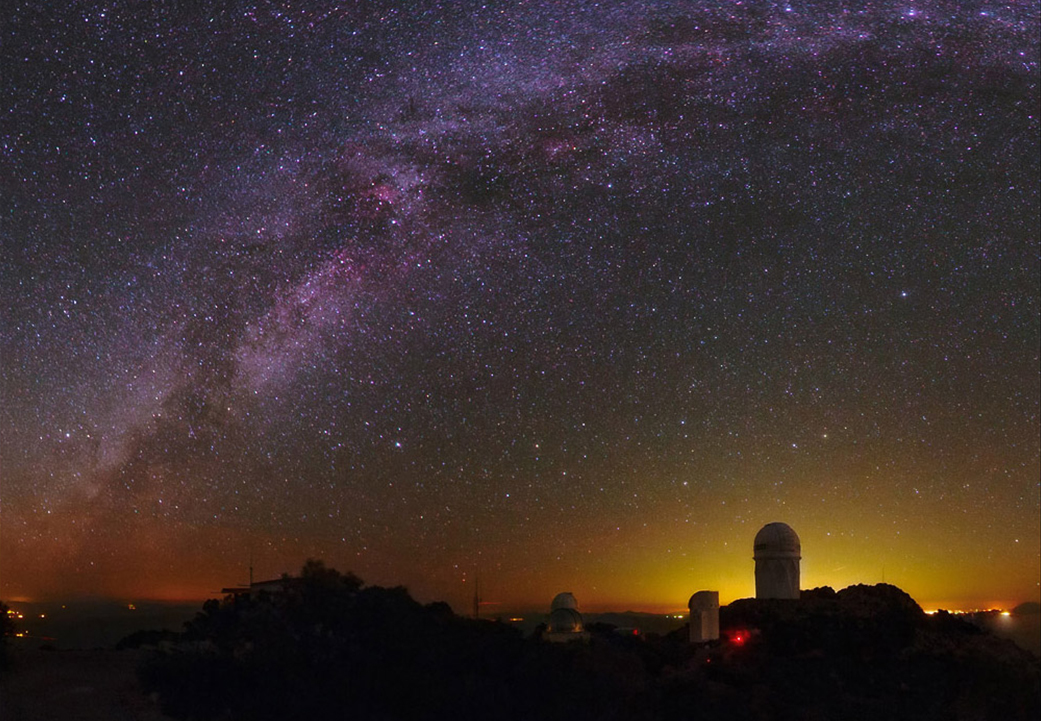 Grapevine, TX – Artificial light at night is a threat to astronomical research, personal safety, and the health of both humans and wildlife. The problem is worsening with the proliferation of LED billboards and blue-rich white light LEDs as an option for street lighting. Within five years, LED technology will take over as the dominant type of outdoor lighting technology. With this in mind, scientists and lighting engineers say now is the time to implement strategies for reducing light pollution. By working together, they are identifying the best type of LED to use while suggesting actions that minimize intrusive lighting.

Meeting in Grapevine, Texas at the 229th meeting of the American Astronomical Society (AAS), representatives from several western United States observatories led a workshop with other dark sky advocates, including a lighting engineer. The workshop showcased successful outcomes with real “before” and “after” examples and an expectation that going forward, cities can achieve good lighting outcomes.

Addressing the inevitable increase in the use of LED lighting, participants identified three factors that are important to minimizing sky glow: shielding, brightness, and color of the light. Ideal fixtures direct light downward—to sidewalks, for instance—but block light from pointing toward the sky. Dimmer lights—whose brightness is appropriate for the task—are preferred, while the color of the light is also important; scientists have shown that blue-rich white light increases glare (thus impairing vision), has a greater geographical spread than light with less blue content, and adversely affects wildlife behavior.

Kitt Peak National Observatory Director Lori Allen said that even in areas where the value of dark skies has been appreciated for years, the conversion from low or high pressure sodium streetlights to white LEDs could be a giant step backward, unless those LEDs are properly shielded and have a color temperature of 3000K (K = Kelvins) or less. She said the 4000K white LED fixtures should not be used for outdoor lighting, as the strong blue light emitted by these is harsh in appearance and detrimental to astronomy and wildlife.

Allen said, “According to a recent report by the American Medical Association (AMA), there is growing evidence that this light may be harmful to human health as well.” (See below for Report 2-A-16, “Human and Environmental Effects of Light Emitting Diode Community Lighting” of the Council on Science and Public Health).

At the Grapevine meeting, the AAS Council announced a three-part resolution on light pollution. It endorsed the International Astronomical Union’s (IAU) “Resolution B5 in Defence of the Night Sky and the Right to Starlight”, supported statements in the AMA report, and called on all AAS members to protect dark skies in their communities.

Chris Monrad, a consulting electrical engineer, is playing a critical role in helping cities mitigate the artificial light problem. Working with Lowell Observatory and the City of Flagstaff, he is helping Flagstaff create a world-leading, LED-based, dark-sky-preserving street lighting solution. This effort is intended to serve as a model for other communities to use to work with, rather than against, dark sky advocates and the lighting industry to find nighttime lighting solutions that meet their particular needs.

Allen said, “I encourage anyone who is interested in this issue to contact their city and county planners, find out what lighting changes are planned for their community, and let their officials know what kind of lighting they want. It’s essential for citizens to be involved. If you are looking for a good place to start, contact the International Dark Sky Association (www.darksky.org), who can put you in touch with your local IDA chapter.”

The AAS calls on all US communities to adopt the following principles for outdoor lighting:

1. Full cutoff shielding — no light should escape above the horizontal from any outdoor light fixtures.

2. Spectral management — blue light should be minimized everywhere and light sources should be as monochromatic as possible near critical observatory and natural sites.

The National Park Service says a decadeslong commitment to preserving a dark sky for stargazers and wildlife is paying off for a small Arizona city, with images showing far less excess artificial light than cities of comparable size

NASA’s first asteroid sampling mission launched into space beginning a journey that could revolutionize our understanding of the early solar system.

Large Binocular Telescope Observatory places itself as the forerunner of the next generation of extremely large telescopes.
Recent Posts
Archives
Copyright © 2023 Arizona Astronomy Consortium - All Rights Reserved
This site shines because of shinecreativeindustries.com
Back To Top
×