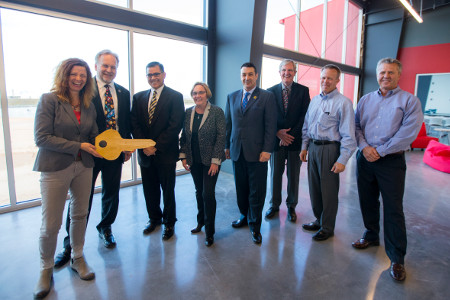 Pima County and World View officials Dec. 29 marked the completion of Spaceport Tucson and the headquarters and manufacturing facility the innovative aerospace company will lease from the County.

Pima County entered into an economic development agreement with World View in January to retain the company in Tucson. World View introduced a new, high altitude flight vehicle, the Stratollite, earlier this year. World View was being courted by several other spaceport states in 2015 but chose to stay in Tucson with the stipulation the County construct a building it could lease before the end of 2016.

As part of the incentive agreement, World View also will manage and operate the adjacent county-owned Spaceport Tucson, a 700-foot diameter concrete launchpad the company and others will use to launch high-altitude balloons.

“This was a good year for economic development announcements in Pima County. It started with World View, then Caterpillar, then Vector Space, then Raytheon. All told, it’s more than 3,000 new jobs pledged. We’re expecting a few more major employment announcements in 2017, too. But what today is about is what comes after the announcements. It’s about manufacturing, about success, about jobs, and growth and prosperity,” Bronson said.

World View, as part of the agreement, is expected to employ more than 400 employees in the next five years, with average annual salaries greater than $55,000.

Phoenix-based Applied Economics Inc. in 2015 conducted an economic impact study of World View’s proposed operation and estimated the company could have a $3.5 billion direct and indirect impact on the local economy over the next 20 years.

“This collaboration puts Tucson at the forefront of spaceflight technology development. The support from Pima County shows the commitment to innovation and economic development in this region. We are thrilled to be in the building on time and impressed with how collaborative the process has been with all our partners involved to ensure the successful completion of the Spaceport and World View HQ.” said Jane Poynter, CEO of World View.

AAS President Testifies to Congress on Why Astronomy Matters

Recent Posts
Archives
Copyright © 2023 Arizona Astronomy Consortium - All Rights Reserved
This site shines because of shinecreativeindustries.com
Back To Top
×