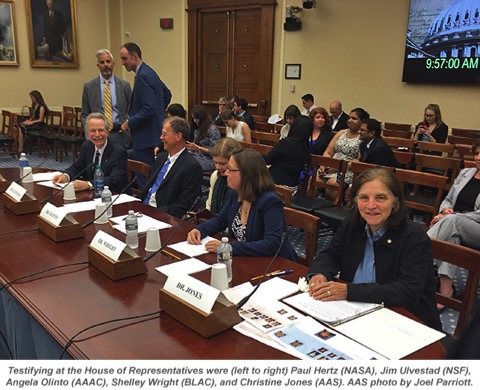 The purpose of the hearing was to examine astronomy, astrophysics, and astrobiology programs, projects, and activities at NASA, the National Science Foundation (NSF), academia, and the private sector. “We are very fortunate in the United States to have a robust fleet of space- and ground-based observatories that allow us to make exciting new discoveries about our universe,” said Jones in opening her testimony. “Congress has long been a strong supporter of these programs at NASA and NSF, and for that our community is extremely grateful.”

Jones then went on to describe some highlights of astronomy’s many contributions to scientific discovery, technology development, and science education. Until recently, she pointed out, “the only planets we knew about were in our solar system, dark energy had not been discovered, and supermassive black holes were not known to be common in the centers of galaxies.” Today, thanks to research conducted with significant public and private support, we know of thousands of planets around other stars, we’re hot on the trail of both dark matter and dark energy, which together appear to make up all but 5% of the universe, and we find black holes in the hearts of most galaxies.

“This research has more than pure academic value,” said Jones. As two examples, she cited digital cameras and baggage scanners. Thanks in part to astronomers’ efforts to make CCD detectors sensitive to the faint light from distant celestial objects, digital cameras are now ubiquitous, even in our phones. “And technology originally developed for observing X-ray sources in space,” said Jones, is now routinely used for security screening.

“Perhaps the most important technology transfer of all,” Jones asserted, “is technically trained people. Astronomy is really a gateway science that brings people into STEM fields” (STEM is an acronym for science, technology, engineering, and mathematics). But, she said, “most scientific fields, including ours, have a very long way to go on the path toward being fully inclusive of underrepresented minorities. There are no easy answers or quick fixes, but our community is committed to doing better.”

Joining Jones as witnesses were Paul Hertz, director of NASA’s Astrophysics Division; Jim Ulvestad, director of NSF’s Division of Astronomical Sciences; Angela Olinto, chair of the Astronomy and Astrophysics Advisory Committee (AAAC) and professor of astronomy and astrophysics at the University of Chicago; and Shelley Wright,  a member of the Breakthrough Listen Advisory Committee and an assistant professor of astrophysics and space sciences at the University of California, San Diego. All five speakers’ written testimony is available from the House hearing page.

The American Astronomical Society (AAS), established in 1899, is the major organization of professional astronomers in North America. Its membership (approx. 8,000) also includes physicists, mathematicians, geologists, engineers, and others whose research interests lie within the broad spectrum of subjects now comprising contemporary astronomy. The mission of the American Astronomical Society is to enhance and share humanity’s scientific understanding of the universe, which it achieves through advocacy, publishing, meeting organization, education and outreach, and training and professional development.

Recent Posts
Archives
Copyright © 2023 Arizona Astronomy Consortium - All Rights Reserved
This site shines because of shinecreativeindustries.com
Back To Top
×